The Menzies Government introduced the compulsory selective National Service scheme in a speech to a vacated House of Representatives on November 1964.

Of note is that neither Arthur Calwell, Opposition Leader and who became one of the first to speak out against conscription, or Gough Whitlam, who as Prime Minister abolished and released the Draft Resisters from gaol, were in the house at the time having gone back to their electorates. Menzies used the fear of ‘aggressive communism’ in Asia concluding that Australia had inadequate defence manpower with the aim of strengthening of the army by the end of 1966 by introducing national service.

The scheme required 20 year old men to register with the Department of Labour and National Service (DLNS). A ballot was then conducted based on birthday dates; if yours came out you were deemed conscripted for two years service in the Regular Army, which meant serving in Vietnam. 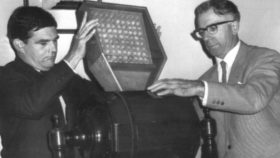 181 Marbles go into the Barrel for the Conscription Draw

When the scheme was introduced the Government planned to raise 4200 servicemen during the second half of 1965, then 6900 annually thereafter. This would create the desired Army strength of 37 500 full-time soldiers. In August 1965 Menzies announced that from 1966 the annual intake would be maintained at 8400 (two intakes of 4200), resulting in an Army strength of 40 000. He explained that the Government’s decision had been made ‘in the light of the successful introduction of the national service scheme and bearing in mind all the various commitments, at home and abroad, which our forces might be required to undertake’.

The process for registration, once the age of 20 was reached, involved filling in a form obtained at a local national service registration office or the Post Office. Failure to register was an offence. 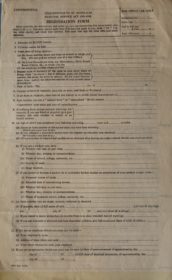 Those who failed to register at the correct time, notify change of address, attend a medical examination or report for call up, provide required information or who made false or misleading statements were deemed non-compliers or ‘defaulters’. The Government tracked the defaulters through electoral records-remembering that until 1973 people under the age of 21 were not eligible to vote-, the Commonwealth Employment Service, child endowment records amongst others. They also obtained information from newspapers, employers, and anonymous individuals. From July 1965 they complied, held and shared the list of known defaulters.

In 1968 amendments to the National Service Act increased penalties for breaches of the Act and to increase the powers to trace the defaulters. It also gave power to the Government to require individuals and organisations to disclose information and increased the penalty for offences under the Act including fines for burning registration cards, filling in false registration cards and making false statements. Parents, solicitors, doctors and ministers of religion were exempt from the requirement to report.

Part of the amendments included the power for university records to be viewed by DLNS officers but after protests by the Australian Vice Chancellors Committee this was abandoned.

Those who failed without good reason to register for national service were considered for prosecution. The case was heard in the Magistrates Court and if convicted the individual could be sentenced to prison for the period equal to national service that is – two years. Prior to 1968 they were sent to military custody but following pressure by a number of groups- Australian Council of Churches, the Australian Quaker Peace Committee and the Federal Pacifist Council of Australia –the legislation was changed and they were sent to civil prisons.